A Polish actress and model. Joanna Krupa, best known for her role in Bravo’s reality series, The Real Housewives of Miami. She moved to the United States with her family while still in grade school. Blessed with good looks, she eventually started to work as a model in her early twenties. She’s graced some of the best-selling magazines over the years. This include Inside Sport, Envy, Steppin’ Out, and Maxim, to name a few. Featured on the cover of Playboy.

Interested in acting, Joanna Krupa had her first break in 1994 in an episode in ER. Over the next few years, she continued to play small roles in various films. In 2009, she received a small break after landing a spot on the ninth season of ABC’s dancing competition series, Dancing with the Stars.
An animal rights activist, the blonde has supported PETA on several occasions in the past. For instance, she has posed for numerous ad campaigns, including one that saw her covered in full body paint in 2015. 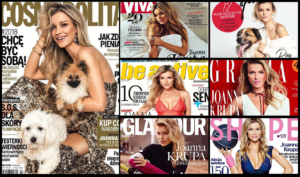